Tara Ocean Japan and Jambio collaborate to study the microplastic pollution in Japanese coastal waters and to increase awareness on the environmental threats that the ocean is facing. 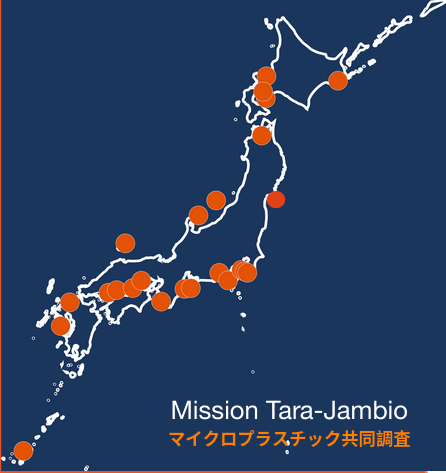 Plastic pollution comes from the land with a large part of it flowing through the rivers as it was recently shown by the Tara Microplastic mission in Europe. Studies available in Japan showed the presence of microplastic in most rivers sampled (Kataoka et al., 2019) and high concentration in coastal waters (Isobe et al., 2014). However no studies in Japan tried to link these two and assess the flux from rivers towards the open ocean. In this regard, the sampling for the proposed project will be conducted along a transect from river mouths towards the open ocean. Quantification of microplastic pollution in marine sediment

The plastisphere in Japanese coastal waters and marine sediment

Microplastics in the oceans get rapidly colonised by various microorganisms. This ecosystem has been recently described as the “plastisphere” (Zettler et al., 2013). Although still limited, a number of studies showed a various community of microorganisms attached to microplastics including virus, bacteria and protists. These fouled microplastic were also found to be more biotoxic than pristine plastic (Wagner et al., 2014) and could alter the physiology and survival of marine organisms or even pose a threat for human health (Lu et al., 2019). Finally, microplastic have been found to travel long distances across oceans (Galgani et al., 2015) and could therefore act as a raft for pathogens (Goldstein et al., 2014; Viršek et al., 2017) or invasive microorganisms (Reisser et al., 2014). It is therefore of utmost importance to document the microbial communities attached to microplastic in order to assess their potential effects on marine ecosystems and human health. During the Tara-Jambio project the microbial communities attached to the microplastics sampled, the plastisphere, are analysed using next generation sequencing targeting prokaryotes and protists. Moreover to assess the difference and potential impact on local biodiversity, environmental DNA is investigated at the sampling locations.

Governments around the world have taken plastic pollution as a serious threat and it has resulted in an agreement taken by countries of the G20 to reduce plastic pollution. This was certainly due to an increase in media coverage and general public awareness. However education on the threats caused by plastic pollution as well as the solutions for the reduction in plastic usage is still lacking. Moreover plastic pollution can serve as an avenue to outreach concerning other threats to the marine environment such as climate change, ocean acidification, overfishing, etc. Thus, we organise outreach events targeting children and the general public. Finally, following the lead of previous Tara Océan Foundation projects, we actively collaborate with artists, to explore new avenues of communication.

These aims were divided in four topics:

All the data obtained during the project will be uploaded on Zenodo under the Tara Jambio project page: https://zenodo.org/communities/tarajambiomicroplastic/. The data will be freely accessible to anyone following the principle of “open science”.